Green Belt & and impact on Housing

PARTS of Bromsgrove’s Green Belt land will have to be built on in order to meet the district’s future housing demand to 2030. 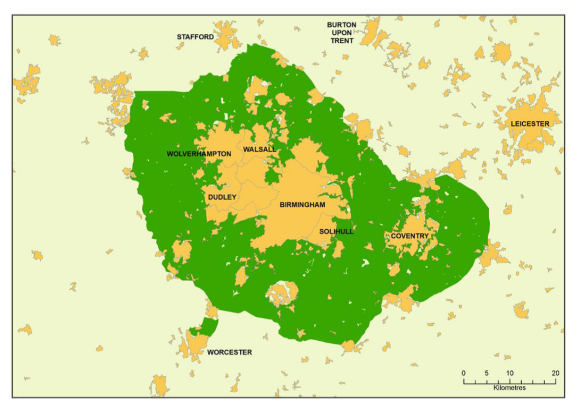 Alvechurch Parish is ALL GREEN BELT!

We must remember that all of Alvechurch Parish land is now GREEN BELT, apart from the very inner parts of Alvechurch Village, and the parish has no available land left for future building only areas within the Green Belt land.

We have used our last two reaining sites that were reserved for future housing in the 2004 District plan: The new Alveston Close development has just been completed and the site on the corner of Old Rectory Lane and Birmingham Road (Rectory Gardens) which had approval for 28 houses is now completed. These two sites should take the parish’s provision for housing up to 2023 as stated in the current emerging BDC Local Plan which is nearing adoption.

So future housing from 2023-2030 for our Parish will have to be built on some sustainable Green Belt sites somewhere as Alvechurch Village as it is classed as a “Larger Settlement” and is expected, as stated in the emerging District plan, to take some of the future housing for Bromsgrove District! No specific numbers have been indicated by Bromsgrove District Council(BDC).

Sustainable sites according to the Government are those which won’t put pressure on the environment and will reduce the need for using motor cars whilst  allowing  local  infrastructure  that has the ability to cope with this growth. This suggests sites whithin walking distance of facilities and amenities ,i.e.some development around the edges of Alvechurch Village itself.

The Neighbourhood plan suggests that to be sustainable, all future development ideally should be within a reasonable walk of Alvechurch Village centre.

Bromsgrove Council leader said: ” It was inevitable some sustainable development would be needed within the green belt to accommodate up to the 7,000 houses needed across the district by 2030.
Planners have already identified sites for 4,600 new homes which will meet requirements up until 2023. But where the other 2,400 will go is still to be decided and a review of the green belt, which makes up 91 per cent of the land in the district, is currently underway.
Coun Hollingworth said: “We will look for natural and man-made boundaries to prevent further growth but we are going to have to go into the green belt.
“Rather than change the character of the district though we will spread them out across a fairly big area so we are not getting large developments.”
The review will focus on finding sites where building will have the least impact and areas with boundaries such as major roads, motorways or other permanent features to prevent further sprawl.
Development will focus first on brownfield sites – previously built on land – where possible but it is not yet known how much of that type of land will become available during the next decade and be suitable for housing.
About 59 sites previously discounted purely because they were in the green belt will be among those considered as part of the review and could deliver over 5,000 homes, more than meeting the shortfall.
Further pressure on Bromsgrove’s land supply is in the pipeline as Birmingham City Council is expected in the near future to formally approach the district council under the Localism Act to ask them to take some of their housing allocation which could also number thousands although an exact figure is not yet known”.

“We encourage Councils to make best use of this land, whilst protecting the openness of the Green Belt in line with the requirements in the National Planning Policy Framework.
Planning Minister Nick Boles wrote to Sir Michael Pitt, Chief Executive of the Planning Inspectorate to emphasise that it is for the local authority to choose to review its green belt land as part of its local plan process. There are advantages to the green belt policy and it is undeniable that it has helped to retain the rural character of large areas of the region which otherwise would have become overwhelmed by urban sprawl in the last 50 years. However, it was designed for a different time, and it is now working against the ideal of sustainable communities which hope to encourage people to work, rest and play in the same local area. As a result, there are areas of the region where the green belt is adding stress to the immediate transport network and inadvertently placing pressure for development on valuable areas of green space within urban areas. We recommend continuing support for this policy of selective review of green belt”.

For its Local Plan to be accepted Bromsgrove District Council needs to show that its lack of available Brown Field sites after 2023 for future housing is due to the Green Belt taking up 91% of District land. It must show to the Government that this impact on the Local Plan’s proposal has been fully considered and this is an additional and important reason for undertaking a review of the Green Belt to address this concern”.

The Governments new planning legal document that all local authorities and planning departments have to follow is the National Planning Policy Framework (NPPF), and paragraph 47, provides that:
“To boost significantly the supply of housing, local planning authorities should: … Use their evidence base to ensure that their Local Plan meets the full, objectively assessed needs for market and affordable housing in the housing market area..”

For BDC based on a latest assessment of housing need, this means enough land to deliver at least 7000 new homes between 2011 and 2030 within and “adjacent to the most sustainable locations in the District”, following a settlement hierarchy of Bromsgrove Town first and then larger settlements, of which Alvechurch village is one taking some of these numbers to address the total. This is in order to meet Bromsgrove’s own needs and unmet needs arising from the wider District area. There is sufficient land available till 2023 which will meet 4600 of the total, some already being built but meaning land has to be found for a further 2400 from 2023 to 2030 for the whole district.
In order to ensure a constant supply of housing land, the NPPF also makes it clear that Local Planning Authorities must have a 5 year land supply of deliverable housing sites at any point in time. In addition to this, a further ‘buffer’ of sites equivalent to 5% or 20% (in the case of authorities that have persistently under delivered housing in the past) of the 5 year land supply total should also be available for housing development. This is to provide flexibility if sites fail to develop at the time and at the rate that is expected.

Bromsgrove’s proposed plan has this provision of land as long as some reviewed Green Belt land can account for some extra building after 2023 as stated by Bromsgrove District Council’s Plan.

Such a review of the District Green Belt is to be undertaken soon and our Neighbourhood Plan will be sought to influence where such a review might be needed around the edge of Alvechurch Village. BDC would  include consultations and use our  Neighbourhood Plan as a community guide for such a  Green Belt review. This would give us a say as to, which sites the community think would be best and what density and mix of housing would be needed for families, ageing residents and younger people trying to access the market including provision for any needed extra facilities or improved infrastructure to accommodate this future housing.

Alvechurch Village is classed as a rural urban village and consequently the land in our parish identified for possible future housing through a Green Belt review for sustainability purposes would be somewhere around the edge of Alvechurch village. In the smaller settlements there are provisions for limited infilling within their village envelopes and possibly for some rural exception sites but only if there has been a very local housing survey proving a definite very local need for purely affordable social housing.

It has to be recognised however that the larger settlements of which Alvechurch village is one, lie some distance from where there is greatest pressure for development – i.e. the main Bromsgrove, Redditch and Birmingham built up areas. Consequently its ability to cater for overspill development needs from these main areas cannot, taking account of sustainability factors, be seen as being particularly significant. Ultimately the scale of any such future development should be of an appropriate scale to reflect the sustainability of each settlement. The Bromsgrove local Plan therefore recognises that some development within and adjacent to these larger settlements will be needed but has to be appropriate and should not very significantly serve the needs of large urban areas.

Thats why we need to have our own Neighbourhood Development Plan so that we as a community have the first say in where our future housing should be , …what it looks like…and for whom it is for,…. making sure our facilities are able to cope with it .

– you saw ‘Broad Areas of land  around Alvechurch Village” and accompanying information to help you decide which Areas might be the best  for BDC to concentrate on within the Green Belt of Alvechurch if or when  Bromsgrove District Council (BDC) carry out a “Green Belt Review”. Some future housing as mentioned in BDC’s emerging Local Plan  to support  their future strategic housing numbers  is seen to be needed in our parish following 2023 and through to 2030.

The NP steering group wants our community to have a say where it thinks land in Alvechurch might need to be released for future housing through a  Green Belt review.

It must be pointed out that this is not part of the current draft Neighbourhood Plan policy  but an exercise that can be used later in cooperation with Bromsgrove District Council and seen as a way to jointly work on a GB review when and if needed.

The Neighbourhood Plan(NP) can not decide how to  do such a review  but  can work and cooperate with  the District Council and their officers in pointing to sustainable areas where Green Belt constrictions could be lessened  to allow some future needed Alvechurch community housing to take place.

Through your opinions The Neighbourhood Plan will then be able to positively   influence any future  Green Belt  review by working jointly with the Bromsgrove Strategic planning officers.

According to government the green belt serves five purposes:

Bromsgrove’s District Council’s role as the Local Authority is to advise and check the Neighbourhood Plan conforms to local and Government legislation and regulations, and ultimately adopt it as part of the District-wide development plan.

There is a desire to safeguard the purpose of the Green Belt and its function of maintaining openness between conurbations and settlements, by promoting development only within the Alvechurch Village boundary which is seen as sustainable and prevents sprawl into the open countryside.

“Help us to bring future planning decisions back to local people. They know what’s best for their area. We can’t stop change, but we can influence it”.

All information about the Plan is available at the plan web site:          www.alvechurchparishplan.org

VOTE YES FOR YOUR NEIGHBOURHOOD PLAN

2 Responses to Green Belt & and impact on Housing